Will We See Black Bears at Cabins in Gatlinburg and Pigeon Forge?

One of the most popular questions we get from our guests is — “Will we see black bears at our cabin?”

To answer it simply, it’s unlikely that you will see black bears at cabins in Gatlinburg and Pigeon Forge. Having a black bear wander up to your cabin is dangerous, which is why you should take safety precautions to decrease your chances of attracting one. If you’re hoping to see a black bear in the Smoky Mountains, you should go about it in a safe way,

We’ve come up with a few tips to help keep black bears away from your cabin and places you can visit to safely spot a black bear in Gatlinburg or Pigeon Forge: Black bears in Tennessee eat just about anything, from berries and nuts from the trees to salamanders and insects. Most importantly, bears need acorns to thrive. Acorns provide carbs that the bears use for building up their fat. Foods from our human lifestyle can be toxic to bears. The main reason a black bear in Gatlinburg or Pigeon Forge would find their way to your cabin is if they smell food. Here are a few tips on how to keep them away:

1. If you spend time grilling outside or having a picnic lunch, make sure to pick up any garbage and scraps of food. It’s best to eliminate any scent of food from the area.

2. For the most part, bears won’t bother an area unless they smell food. So, in addition to ridding of all of the trash, make sure the grill areas are cleaned and free of any leftover scraps.

3. Be sure to use the designated garbage cans, so trash is secured away from any wildlife. Don’t leave garbage sitting on the porch, even if it’s tied up in a bag. 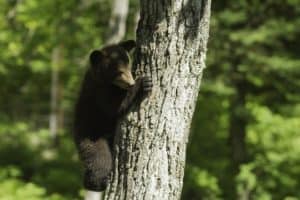 How Big are the Black Bears in the National Park?

Believe it or not, the black bears are the smallest of all of the North American bear species. Black bears in Tennessee vary in weight and size, but males generally weigh between 200-240 pounds, while females generally weigh between 120-130 pounds. Although, these measurements are definitely an average. The largest male captured in the national park weighed about 400 pounds, while the largest female weighed 227 pounds. An adult black bear in the Smoky Mountains can stand (on its hind legs) up to 6 feet tall.

In the fall season, black bears can gain 3-5 pounds each day! But they don’t hold on to this weight for long! The bears lose weight throughout the year, when they can’t find as much food, like the winter months.

How Many Black Bears are in the Great Smoky Mountains National Park? The black bear is the only bear you will find when you visit the Great Smoky Mountains National Park. The black bear is the second largest native mammal (the elk is larger than the black bear) in the national park, and there are approximately 1,500 bears in the national park. This is about 2 bears per square mile, one of the highest per-square-mile populations in North America. That’s why it is one of the most common types of wildlife spotted by Smoky Mountain visitors! Where to See a Black Bear in Gatlinburg or Pigeon Forge

If you want to see the black bears in the Smoky Mountains, you should make your way to the Great Smoky Mountains National Park. There are hundreds of hiking trails in the national park, for spending time exploring the wilderness. Make sure to pack your camera, so when you see a black bear, you can catch a good photo. Even if you don’t see a bear on the trail, it’s extremely likely that you will see one while you’re driving around the area, especially if you take a drive along any of the motor nature trails or Newfound Gap Road. Cades Cove is one of the most popular spots to see black bears in the Smoky Mountains.