The 3 Cades Cove Churches You Just Have to See

Cades Cove is probably the most popular destination inside the Great Smoky Mountain National Park. There is a lot to see in the area. Three Cades Cove churches sit along the 11 mile loop. Each church has their own character and history. You can walk inside and explore the churches. Each are a must see stop! John and Lacretia Oliver were two of the first settlers in Cades Cove. They built a small, log cabin home and the Primitive Baptist Church. The primitive church was established in 1827. The church was constructed so that Baptists in the Cove didn’t have to travel through the Smoky Mountains to attend Sunday services in Millers and Wears Cove.

During the 1800s, a hot debate made its way into Cades Cove that caused a division in the church. The debate was sparked due to a biblical interpretation where one side believed that the scripture allowed for missionary work and the other did not. The debate become so bad that half of the congregation was expelled. The smaller congregation left in the church became known as primitive baptists and the church as the Primitive Baptist Church.

Few records of the Cades Cove Methodist Church exist, but it’s believed methodists have been active in the area since the 1820s. However, it’s known that the original meeting structure was very bare. Moreover, it was made up of old logs and a dirt floor with a fire pit. The church that stands in Cades Cove today was actually built in 1902. John D. McCampbell built the church with his carpentry skills, and was also the pastor of the church. Amazingly, the church was built in 115 days and only costed $115! The church has two entry doors and the purpose of this was that men enter and sit on one side with women and children on the other side. 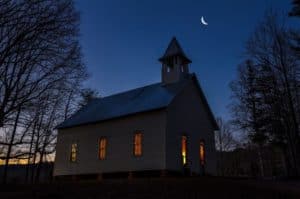 The Missionary Baptist Church came about after the split of the original baptist church. The church was established in 1841. The members originally had no formal meeting space, and instead used members’ homes for services. In 1894, a structure of their own was built on Hyatt Hill. The church congregation grew steadily over the next several years. Subsequently, the increase in members meant a new church was built in 1915. This church is the one that you may now visit along the Cades Cove loop.

If visiting Cades Cove is on your list of to-dos the next time you come to the Smokies be sure to stay with Amazing Views Cabin Rentals! We have cabin rental properties in Gatlinburg and Pigeon Forge. Amazing Views Cabins can be your other beautiful and peaceful place for you to lay your head after you explore those beautiful Cades Cove Churches.